Teams of students build their own racing cars. That’s the idea behind the international Formula Student program. In Spain, SEAT is sponsoring the competition, where there’s more at stake than just being the first to the finishing line.

“Formula Student is more exciting than a Formula One race”, says SEAT’s engineer Miguel Ángel Escudero. He is standing on the Circuit de Catalunya to the north of Barcelona. He is one of 19 SEAT specialists evaluating the performance of the next generation of young technical specialists. A total of 900 budding engineers in 34 teams showcase their self-built racing cars, some of them powered by a combustion engine and others by an electric motor. “The results are really professional”, says Escudero. “We evaluate what the students have achieved not only in terms of engineering and how the car handles, but also as regards their cost acccounting and business skills.”

Before the one-seater cars arrived at the race track in the late summer of 2013, they had spent a year in development – planning, drafting, running simulations, building and testing models. “You say goodbye to your private life as soon as you join the team”, says Jan Glenzer, aged 27, who came to Spain with his fellow team members from Esslingen in Germany. “We were often in the workshop from early in the morning till late at night.” Their efforts paid off. The Swabian university students’ racer was placed first overall. Having German teams take part in the Spanish competition is also part of the thinking behind Formula Student. The competitions are held in half a dozen car-loving countries, from the USA to Germany. It’s important that the engineers of tomorrow make international contacts as early as possible. 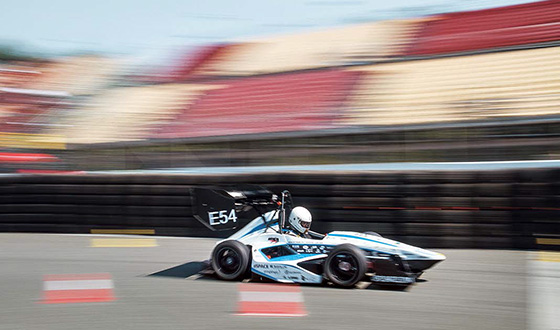 It’s not just about speed: 34 teams present their self-built racing cars on the Circuit de Catalunya near Barcelona.

When they were developing their racing car, the ten students from Rennstall Esslingen took on all the same tasks that confront a car manufacturer with thousands of engineers. Glenzer was responsible for the car’s dynamic handling, among other things. “I modeled the car and ran simulations to work out how we could improve its performance.” He likes the fact that Formula Student encourages working independently and taking responsibility. “I could take the decision to transfer the car to a monocoque chassis. That’s also the design used in Formula One cars.”

“The students learn to understand the car as a whole here.”

Miguel Ángel Escudero confirms this impression. “The students learn to understand the car as a whole here. And that’s exactly what we expect of our future employees”, says the engineer. This is why SEAT deliberately sponsors not just a single team, but the whole competition – even supplying a workshop truck with experienced mechanics ready to help all the teams with technical problems. Through their involvement on the jury, the SEAT engineers get to know the next generation. In some cases, so well that many former Formula Student participants have now found jobs with SEAT or elsewhere in the Volkswagen Group. 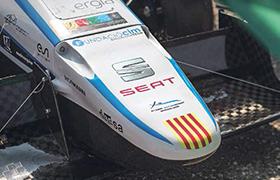 SEAT sponsors not just a single team, but the whole competition. 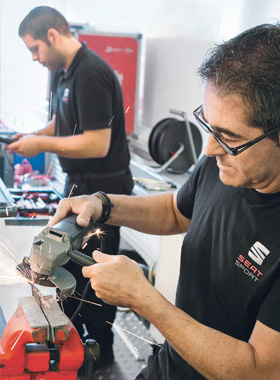