In the not-too-distant future, Audi will be able to offer vehicles that can maneuver through traffic congestion and even navigate tight spaces in parking lots – without any intervention from the driver. “Vorsprung durch Technik” – that’s what it’s all about. That is also why Audi is conducting research into piloted driving in Silicon Valley in the trickiest place of all – in congested city traffic. 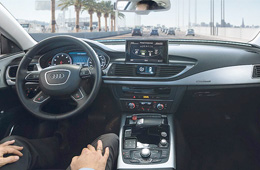 A light load: today, the hardware required for the vast amount of computing power that makes piloted driving possible is no bigger than a laptop. In addition, a new type of architecture is paving the way for automated driving: its “intelligence” resides in a central driver assistance control unit (zFAS) about the size of an iPad.

The vision of driverless driving has already become reality in a research vehicle based on the A7 Sportback1. 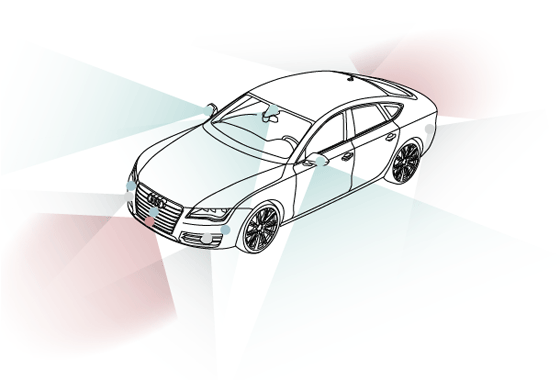 FRONT CAMERA
records images in black and white and color. This is the heart of the sensor technology behind piloted driving. It detects traffic lights and signs, for example.

TOP-VIEW CAMERA
generates a view of the area around the vehicle from the images recorded by cameras in the radiator grill and the side and rear mirrors.

LASER SCANNERS
monitor the road in front and behind, identify stationary and moving objects and help with lane changing.

RADAR SENSORS
at the front maintain a constant distance from crossing traffic and vehicles cutting in. They are also able to “see” in fog. At the back, they support assisted lane changing and blind spot recognition.

ULTRASOUND SENSORS
are located at the front, rear and sides of the vehicle. They provide the all-round visibility needed for piloted parking.

With his hands firmly on the wheel, Jörg Schlinkheider turns into Twin Dolphin Drive in Belmont, California. Suddenly, the screen in the center console signals: the car can take over now. Schlinkheider and his team are conducting research for Audi into the driver assistance systems of the future at Audi’s own Electronics Research Laboratory (ERL). He presses two buttons on the lower spokes of the steering wheel. The A7 Sportback prototype is now driving “by itself” – the driver can lean back and relax. The steering wheel automatically slides forward out of the way, the three-liter compressor starts accelerating and the vehicle stays perfectly in lane. The saloon brakes gently at red lights and before any objects in its way, and comes to a stop in good time.

Meanwhile, the driver has time to do other things: the central screen offers telephone and text messaging functions. Surfing the Internet is another possibility. Very soon it will be possible to access video- conferencing in this vehicle. 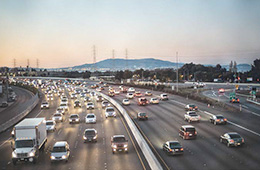 Welcome to the vision of piloted driving, which in this Audi research vehicle has already become reality. Initially the self-driving A7 Sportback gives no indication of its extraordinary capabilities. The additional cameras, radar and ultrasound sensors, and the laser scanners are completely hidden. All sensors are perfectly integrated into the vehicle and are barely visible. And yet numerous electronic eyes and sensors are constantly scanning the vehicle’s surroundings. The data they gather is consolidated and compared in real time in a central processor. The developers’ aim is to replace today’s GPS navigation systems, which rely on data relayed by satellite – in the future, this sensor data will be all that is needed. It will enable the vehicle to make its own way to the destination and to carry out all maneuvers on autopilot, although the driver always remains fully responsible.

Testing the vehicle in this environment shows how far advanced Audi’s piloted driving system already is. Gone are the days of testing the prototypes only on the highway and country roads – now they are also out in heavy city traffic. “The city environment is the biggest technical challenge of all”, says Schlinkheider. In the search for a solution, he also maintains contact with experts from the IT industry and creative start-up companies in Silicon Valley.

“Piloted driving is on the way to becoming a core competency for Audi”, explains Thomas Müller, who is responsible for the whole project at Audi in Ingolstadt. “We use this term deliberately because we believe that, in the future, people will still want to drive their vehicle themselves in many situations.” At the same time, driver assistance should make the job easier whenever that makes sense. Not just maneuvering in tight parking spaces or in parking lots, but also in slow-moving traffic on the highway. Müller predicts that these revolutionary functions could be incorporated into series production before the end of the decade. However, for piloted driving to become reality, the essential non-technical conditions also need to be agreed through working with governments and insurance companies.

That is why it will be some years yet before a series model vehicle manages to make its way through dense inner city traffic completely autonomously. That challenge spurs Audi developers on to research these applications even more intensively. “We keep on learning all the time”, says Schlinkheider. “That’s the only way we will achieve things that seem impossible today.”

At the moment, there are only a few public roads in California where the prototype is tested. When the A7 Sportback nears the end of the test stretch, the steering wheel slides back to its original position. A warning tone alerts Jörg Schlinkheider to take over the controls. This will happen less often in the future, and the day will come when the Audi prototypes will be out piloting across the whole of California. 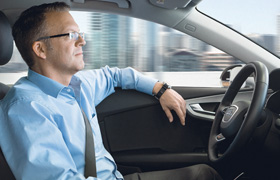 The car that “drives itself” – the driver can relax. 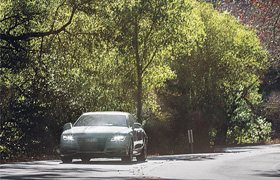 A7 Sportback: the Audi research vehicle has covered a lot of miles.