The Porsche Panamera S E-Hybrid1 represents an entire generation of new vehicles in the Volkswagen Group, combining all the advantages of an electric motor with the performance of a sports car. We put through its paces on a test drive in Leipzig. 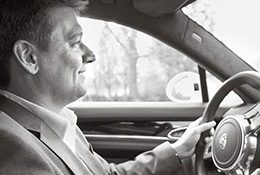 The Panamera S E-Hybrid leaves the Porsche plant on the outskirts of Leipzig with the battery fully charged. The electric motor is the sole power source moving us forward, as long as we don’t press the accelerator pedal below the pressure point.

Out on a country road. A conventional hybrid vehicle would be switching to its combustion engine by now, if not before. But the Panamera S E-Hybrid’s lithium-ion battery is not even half empty. We continue driving exclusively on electric power. 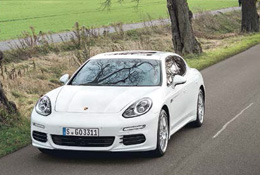 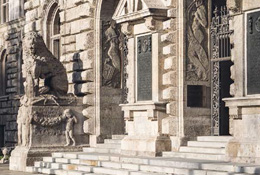 We have reached Leipzig’s historic old town without using the combustion engine. The Panamera S E-Hybrid takes a short break in front of the New Town Hall.

At the edge of the city, the battery registers empty. No problem – the combustion engine cuts in almost unnoticed and takes over. Shortly afterwards, we switch on the E-Charge mode and recharge the battery, saving energy during the journey. 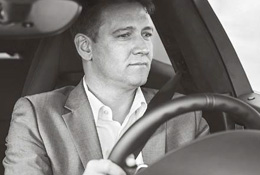 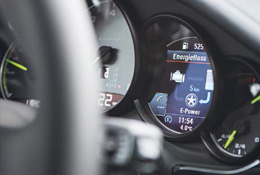 Full throttle on the highway – the combustion engine and the electric motor are now working together. We allow ourselves some fun and move out into the fast lane.

Back at the factory, we do a few rounds on the Porsche test track. Just like every Porsche, the Panamera S E-Hybrid possesses all the essential features of a racing car. “It also corners sideways”, says Gernot Döllner, the engineer responsible for the series. 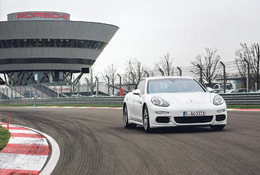 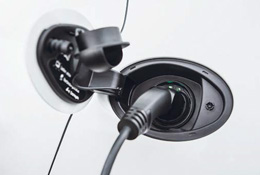 It all began with the idea of bringing together the seemingly impossible in a single vehicle: the out-and-out sportiness of a Porsche, the long-distance touring comfort of a sedan and the fuel consumption of a small car. Years of intensive development work followed, until the automobile finally came into being in summer 2013. The Porsche Panamera S E-Hybrid delivers a peak output of 306 kW (416 PS), with fuel consumption of only 3.1 liters over 100 km in the standard driving cycle.

The man who turned this idea into a model ready for series production is Dr. Gernot Döllner. The powertrain that makes the seemingly impossible possible is the plug-in hybrid. It combines the quiet, emissionfree driving experience of an electric vehicle with a combustion engine’s long-distance touring capability. The Panamera S E-Hybrid features a lithium-ion battery that can be refueled through a domestic electric socket. Once the battery has lost its charge, the combustion engine cuts in. “Even we were amazed to see how far fuel consumption drops when these two technologies are used together”, says Döllner.

The E-Hybrid is built on the same production line at Porsche’s Leipzig plant as all the other series variants. Döllner is a regular visitor. During our test drive through the capital city of Saxony, he explains the car’s different types of operation. It always starts in electric mode. The E-Hybrid solely uses the power of the electric motor until it reaches 135 km/h. The car only shifts into hybrid mode once the battery starts to run low or when the driver presses the accelerator beyond a defined pressure point. That’s when the combustion engine takes over. When the E-Hybrid brakes, the electric motor runs in the opposite direction and recharges the battery. The electric motor provides additional power for acceleration, saving fuel. To recharge the battery during the journey, the driver switches to E-Charge mode – this makes sense, for example, when you want to start using the electric motor again when you arrive in a residential area. As with every Porsche, the driver can also press the Sport button; the Panamera S E-Hybrid reaches its maximum output when the combustion engine and the electric motor work in tandem.

“The E-Hybrid is a truly groundbreaking achievement”, says Döllner. And as he points out, this is not just his view. Plug-in hybrids will play a crucial role in future in the Volkswagen Group’s brands.

HOW A PLUG-IN HYBRID WORKS

The Porsche Panamera S E-Hybrid is a plug-in hybrid. This differs from other hybrid drivetrains in that the battery can be charged through a socket, like in an electric car.

POWER SOURCE
The electric motor sits between the combustion engine and the transmission. If the engine is not needed, it can be disengaged and switched off.

CURRENT TRANSFORMER
Power electronics transform the direct current from the battery into the alternating current needed by the electric motor.

RECUPERATION
Rather than being lost, a large part of the brake energy is converted back into electrical energy.

ZERO EMISSIONS
A plug-in hybrid is charged using a cable. The car has zero CO2 emissions in electric mode if recharged with power generated from renewable sources only.

ENERGY SOURCE
Thanks to a modern lithium-ion battery, a Panamera S E-Hybrid can travel up to 35 km in electric mode, depending on weather and driving style.